Richard longs for the city

Once upon a time there was a boy named Richard. He lived with his family on a farm. He worked very hard.

Every day he left his bed at sunrise and rarely stumbled back to his room before midnight. He helped his father and brothers plow the fields, plant and harvest the crops, milk the cows and scrub the barns. But his life was not all work. He and his brothers loved to go down to the lake and fish while Polly, their sister, played with her dolls on the stony shore. Sometimes they played Pirates, or Pilgrims and Indians in the nearby woods. But winter sport was the best of all. Snow-balling, sledding, ice-skating and just sitting around the blazing fire, whittling or listening to Father tell stories. 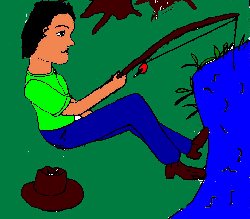 Richard had all the reason in the world to be happy. But, unfortunately, he wasn't. He dreamed of living in the city, in a big, new house with a tiny lawn and no fields or cows or barns. He would sit on his porch after dinner with his big brown dog and gaze over his father's fields and beyond to the little twinkling lights of the nearby town.

Richard ran his hands over the shiny red paint of his friend's new car. All his friends thought that he was weird because he was seventeen and didn't have his own car. He always drove his father's old "beater" around.

"Ricky," say his friend, Ray. "Don't you wish you had a new car? Too bad you live on a farm. Farm boys never get nice things of their own."

That evening Richard told his father that he wanted a car. Father pretended to look heartbroken.

"I raise you up so that you can be a big fine man, and the first thing you want is a car so that you can drive away." But his eyes were twinkling as he sat back in his chair.

Several weeks later Richard reached for his boots as he prepared to make the long hike to the north barn to milk the cows. He thrust his foot into the boot, but with a yelp, pulled it back out and pushed his hand deep inside it. His little brother, James, asked him if there was a mouse in his shoe.

"No," said Richard. "I think that someone dropped their key-" He stopped short with a gasp. Could it be? He drew out a small key ring with a little note from father and a key hanging from it. As soon as he could get his boots on he rushed outside into the chilly morning air.

And there it was, in the gravel driveway, not his dream car, but a car at any rate. Richard stared in disbelief at the big, old, blue road hog his parents had bought him. The only thing new about it were the tires. It had a dent in the door and a crack in the windshield. The vinyl on the roof looked like it had been shredded, with a lovely crop of moss growing between the rips. Father stepped out of the door and stood beside him, beaming with pleasure.

"Well son, it's all yours. You might as well drive it down to the barn. Sort of get used to it, so that you don't die of excitement. It drives smooth as butter." Richard drove his "new" car. It rode smoothly, but he could not enjoy it. He had dreamt of a brand-new car with shiny new paint and sparkling windows. He looked in the rearview mirror at the smoke pouring out of the exhaust pipe. "I'll be the joke of the town," he said grimly.

Richard couldn't believe his ears. The house was his. Uncle Jake from the big city had left the house for him to care take, and when he died, had left it to Richard for his own, right on Main street where there was the most noise and bustle. Richard had enjoyed care taking it, but now it was his! He could do whatever he wanted with it. Richard beamed. 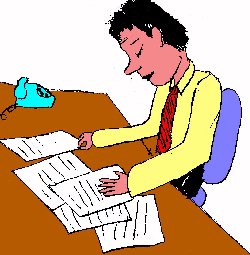 Even the brand-new red sports car seemed even glossier as it sat shimmering before his garage. He had gone into debt for it, but it seemed worth it to be able to drive around in it and show off.

The next day he put on a suit as he dressed for his first day of work. It made him look older than twenty-two.

Work was not very interesting. Sitting at a desk all day, he found himself thinking about the farm and feeling a little bit guilty about the car.

But he soon shut out such thoughts on the weekends. He partied and drank and drove his fancy car. He enjoyed himself during the day, but at night he could not sleep with cars roaring by.

One evening (he had drunken just a little too much) he jumped into his car and drove very fast down the street. Needless to say, he plowed into another car at a stop sign and totaled his fancy sports car.

When he found himself recovering in the hospital, he was very disappointed that it had been his new car and not the old clunker he had given to his little brother, James.

Richard went to work a week later wearing lots of bandages. He was teased and laughed at and had no peace at all until he got home, and then he could not sleep because of all the noise.

Life continued for poor Richard and he became more and more miserable. Making payments on a car he didn't have wasn't much fun. His house was cold and empty. No one would take him on drives. The barking of the neighbor's dog drove him crazy.

Finally, he could stand it no longer. He sold the house, paid off the car, bought a tiny piece of land in the country and started his own business.

Shortly thereafter he met the most wonderful woman in the world. It wasn't long before he had married her. Life was wonderful after that. He never missed the city. His new wife made home more like home and he felt that this was his true paradise. Heaven couldn't be much better.

"Yes, son?" Richard looked up from the book he was reading.

"Really?" said Richard. His eyes twinkled as he looked at his wife over his son's head. "Say, Linda, how about moving to the city?"

The average guy is one that was born in the country, worked hard so he could live in the city, then works even harder to get back to the country.