"What does this mean?" demanded Mother sternly, as she switched on the light in Joyce and Jean's bedroom.

The girls blinked and blinked their blue eyes to get adjusted to the sudden brightness. "Oh, Mother," wailed Joyce, "go down to the foot of the bed, and see if Jean isn't on my side!"

For a minute a smile played around Mother's mouth. To see both girls crowded into the middle of the bed with plenty of room on either side, was almost amusing.

Then her lips closed firmly. "This quarreling habit is going too far. Move over, both of you!" she commanded.

Sitting down by the bed she continued, "I'm going to tell you a story about the Kilkenny Cats.

"These cats were always fighting. When the white cat lay sleeping cozily before the fire, and the black cat came into the room, up leaped the white cat, his back humped up and his tail fluffed out, hissing, spitting, and calling the black cat all kinds of names. He acted exactly like two little girls I know." Joyce turned her head and glanced at Jean. Jean was looking right at her. Mother went ahead as though she didn't notice.

"One day some boys saw the cats fighting in the backyard. They tied the two cats together by the ends of their tails, hung them over the wash line and left them there. 'By morning,' said one of the boys, 'they'll have had enough of fighting.'

"But when they came back in the morning to take the cats down, there was nothing left but the tips of two tails, one black and the other white. They had eaten each other up!"

"Oh, Mother!" giggled Joyce. "They couldn't have done that! Why, how could they keep on eating without mouths?"

"No," smiled Mother, "they couldn't. That's just a story. But little girls sometimes say biting things to each other, until they've nothing good left of each other. For instance, each of you said tonight that the other was selfish; and worse, yet, that the other was lying. So you see that you have eaten up each other's unselfishness and truthfulness. This afternoon I heard you say, 'You mean thing!' So your kindness is eaten up too. I'm afraid some day I'll find I have no goodness left in my girls. It will all be eaten up and only badness will be left." 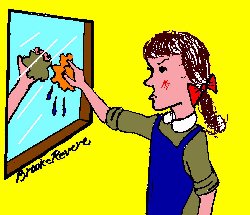 But the very next day Jean knew it was Joyce's turn to wash the dishes. "It is not!" declared Joyce. "I washed them yesterday, so there!"

Soon angry shouts were bouncing around in the kitchen like hail on a window pane. Mother stepped into the kitchen, her face sober and held her hands to her ears. "I thought the 'Kilkenny Kittens' had stopped fighting," she said.

Joyce and Jean paid no attention and Mother walked over to the cleaning closet. In a minute she was back with scouring powder, two small, and two large rags. "Now," she said briskly, "Joyce, you wash the outside of the kitchen window and Jean will wash the inside.

"Now girls," she said, opening the windows a little, "this is what the officers in the army do when big men quarrel. You are to clean this window thoroughly. And you dare not smile at each other! You must scowl all the time.

"I want you to do your quarreling while the glass is between you, so you won't be able to eat each other up.

"What would Daddy say if he came home tonight to find nothing left of his good little girls?"

Joyce and Jean found it very hard to scowl when they had to. Jean looked so funny with the corners of her mouth turned down and her chin jutting forward.

Joyce tried to hide her dimples and push her lower lip out even farther than Jean did. The faces of both little girls grew red. Their blue eyes began to twinkle and the corners of their mouths twitched. Suddenly they both burst out laughing. How foolish their quarrel seemed now!

Of course, this was just what Mother was waiting for. And since the window was sparkling by this time she called the girls in to chat with them. "You know, girls," she concluded, "you really are disobeying God when you become angry and shout nasty things at each other. In Ephesians four we are told to put such things away from us, and to be kind and tenderhearted and forgive each other. Don't you want to stop quarreling and try kindness?"

After that, when Joyce and Jean felt a quarrel "coming on," they would say, "We'd better not quarrel or Mother will stop us with the Army Cure."

From 'Story Time With Grandma.'