Once there was a kind old gentleman who had the finest, most obedient horse in the valley. He never whipped or kicked or said unkind words to his horse, and when he rode he barely had to touch the reins and the horse knew what was wanted. 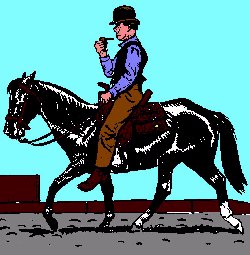 One afternoon Joey Slovin saw the man out riding and, struck with envy, he began criticizing the man and his horse. "That horse is spoiled rotten!" he exclaimed to his companion. "Look! he just lets that animal go wherever it chooses. He doesn't whip or discipline that horse whatsoever. He's ruining that creature!"

From then on every time he saw the horse he would express his contempt to those around him.

One day his own horse took sick.

Joey took advantage of the situation and borrowed the gentleman's horse. Without thinking, he mounted the horse and with a rough jerk of the reins he began whipping the horse with a stick. The horse, startled and angry, reared suddenly and threw the man to the ground.

"You rogue!" the gentleman cried as he helped the man to his feet. "How could you treat an animal like that?" 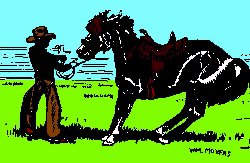 "What!" the man retorted. "Your horse is the problem! Mine doesn't mind being whipped. It's the only thing to make him mind."

"A gentle word is more powerful than a whip," the gentleman tried to explain.

Joey shook his head in disgust. "Your horse needs discipline, not spoiling!"

With a disdainful kick at the fence he stormed off.

After soothing his horse, the gentleman mounted the fine creature and with hardly a touch of the reins he rode back to the barn.

Application: A gentle word is more powerful than a whip, and a fool can never understand the wise.