Baking from your medicine chest

Dad is going to stay up late again," Mom announced as she returned from the print shop. "Would one of you girls like to make him a snack?"

Brooke and Skye brightened at once. They enjoyed making snacks and desserts, especially for Dad.

How about brownies or carob cake?" Brooke suggested.

Oh, Mom," Skye pleaded. "Can't we use soda, just this once?" Brooke's heart sunk as she remembered the rule about soda. It had been discovered that every time they used these products, the entire family suffered stomach problems from the strong chemicals. 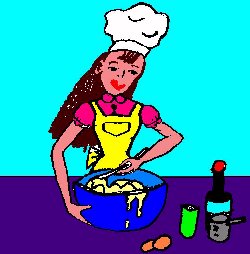 We can't make anything without soda," Skye lamented.

Maybe I have a cookie recipe somewhere that doesn't require baking powder," said mom thoughtfully. With new hope she began searching through her cookbooks.

Several minutes later she found a recipe for a simple cake that didn't call for soda.

She was amazed by the active ingredient used to make it rise. Hydrogen peroxide. Would it work? It was bizarre, but it made sense. "Girls," she called. "Why don't you give this a try?"

Look how pretty it is," Mom exclaimed.

Is it safe to eat?" Skye asked cautiously.

Of course," Brooke replied. "Hydrogen peroxide is only H2O2. It's just water with an extra oxygen attached."

Some people drink it in their water to cleanse their bodies," Mom added.

Besides, if there was anything harmful, it dissipated when it was baked."

The cake was pronounced the best cake they had ever made. Not only was it light and fluffy, but the hydrogen peroxide had bleached the whole wheat flour white.

After the first success, many experiments followed. Pancakes, muffins, cookies and various other baked goods worked as well, if not better, than if they had been made with soda.

To use Hydrogen Peroxide in baked goods make the following modifications to your recipe: